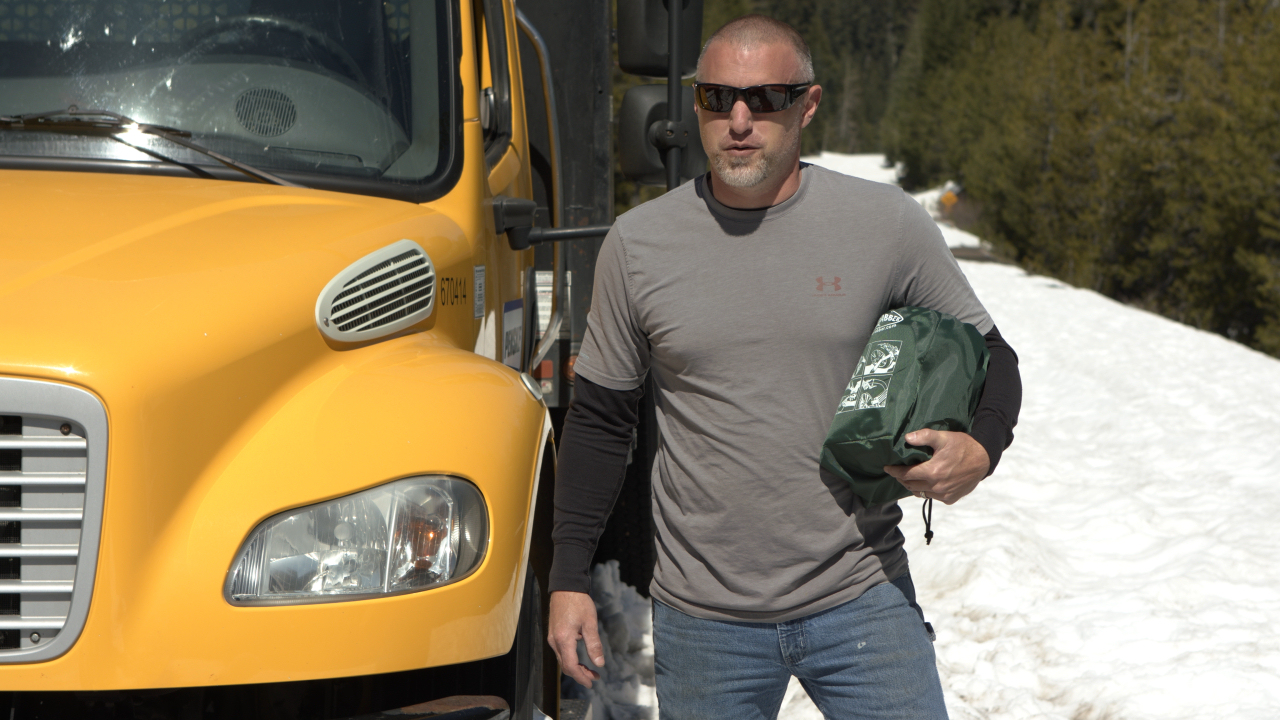 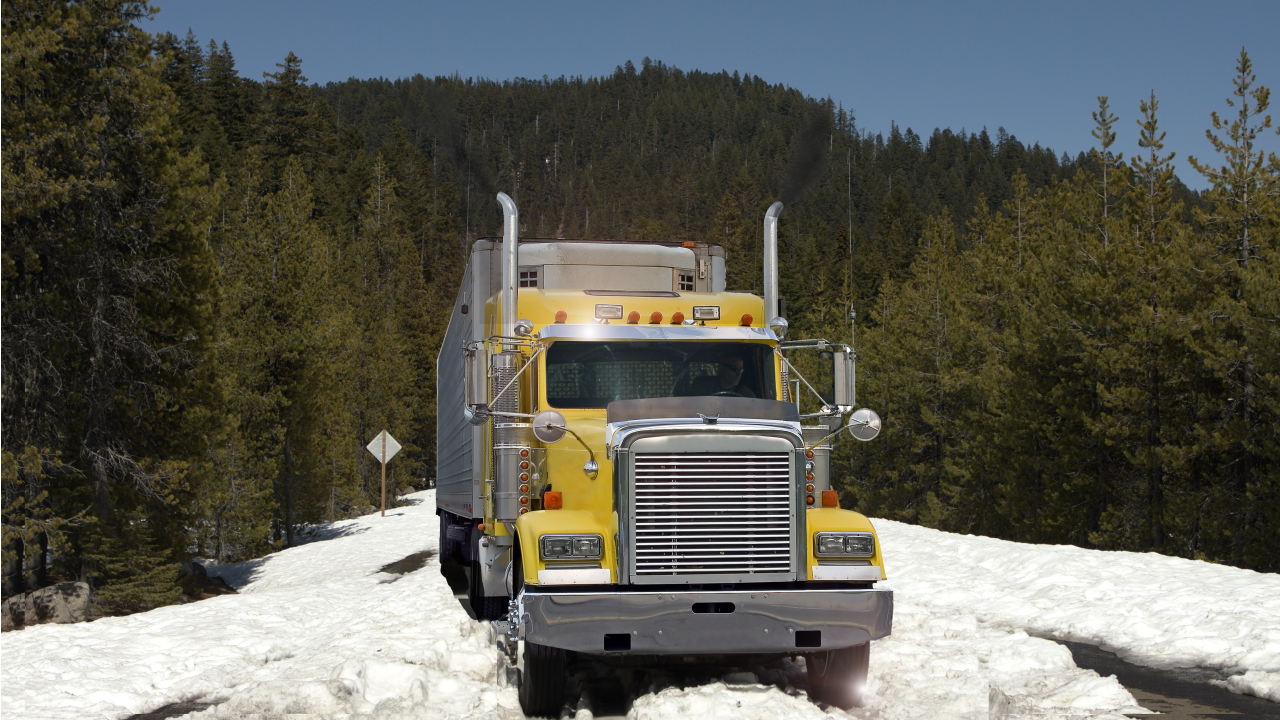 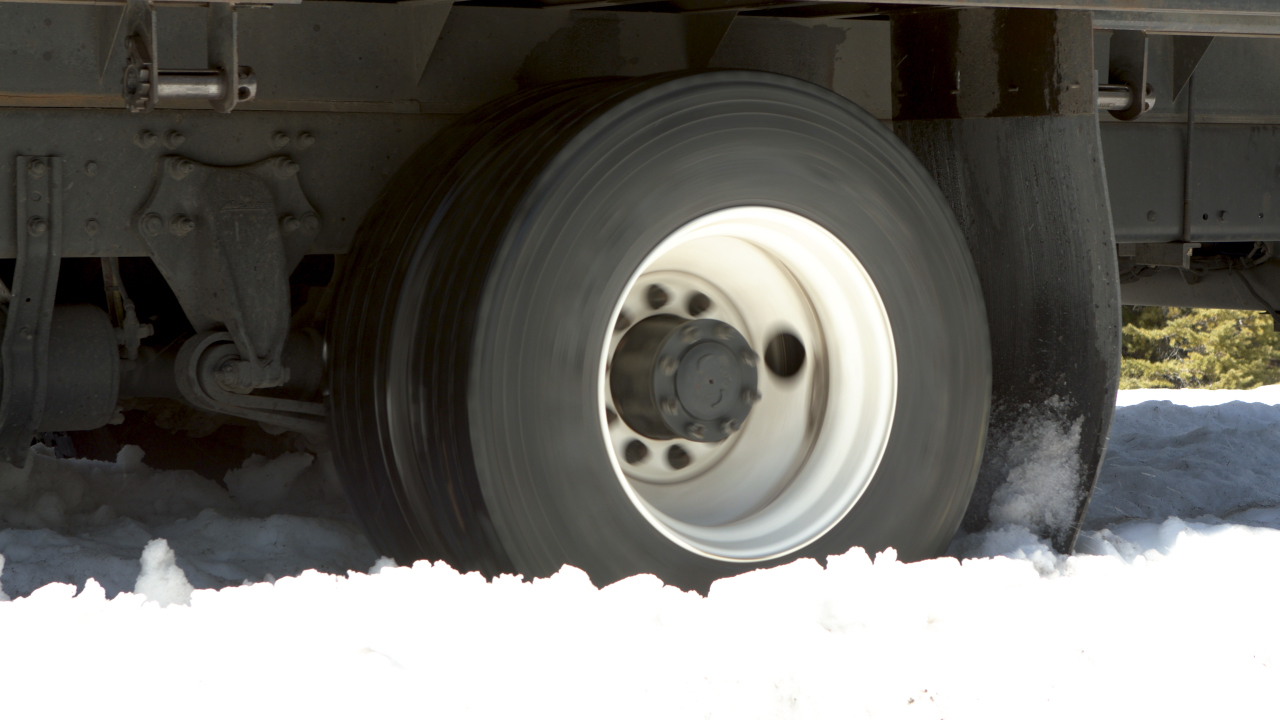 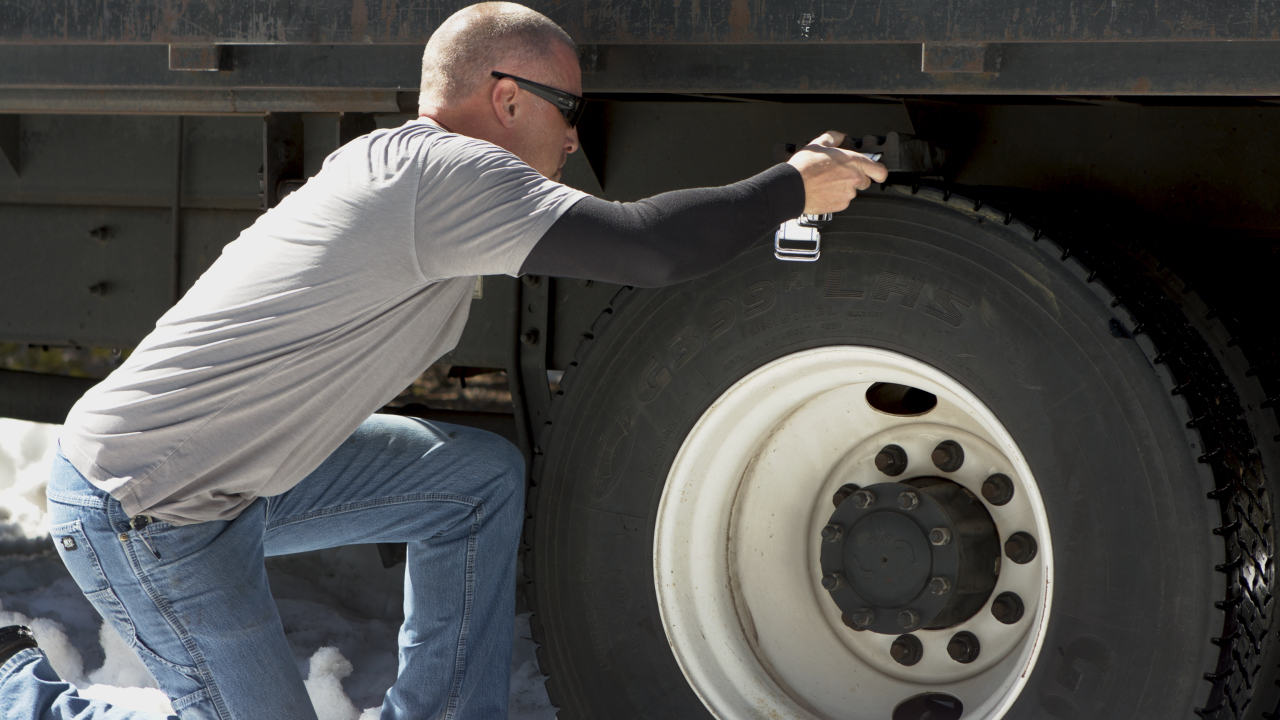 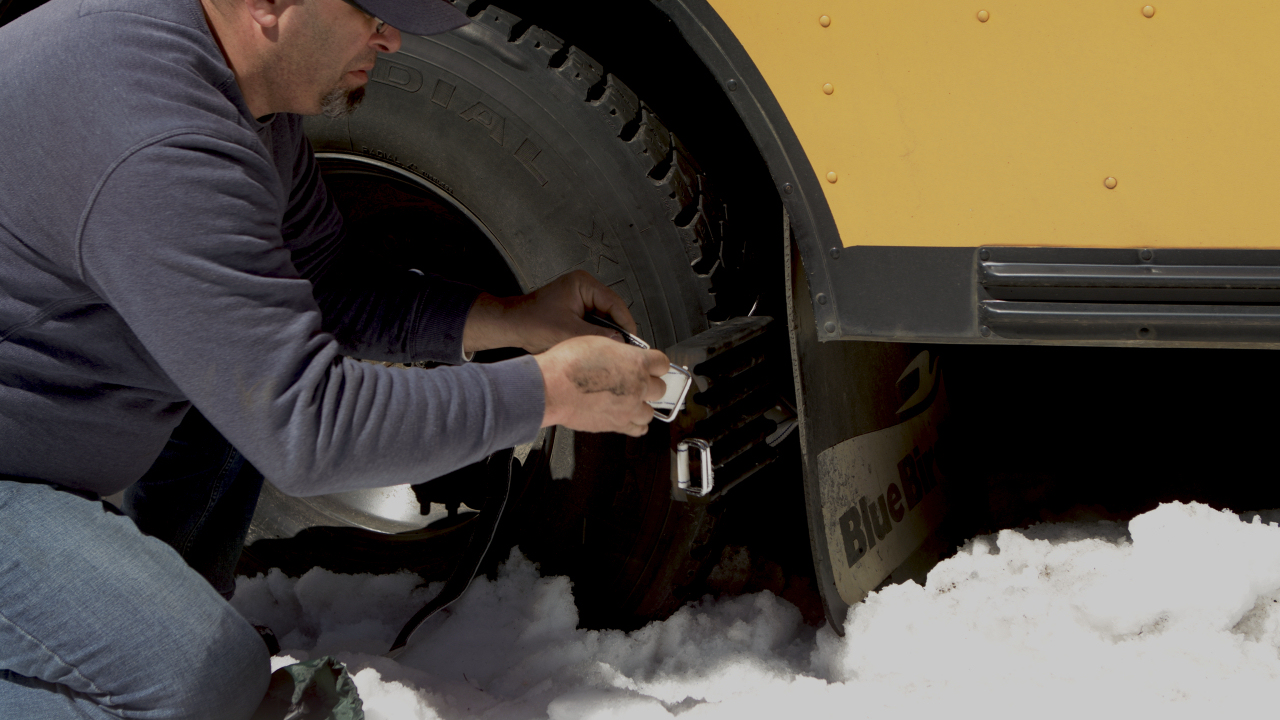 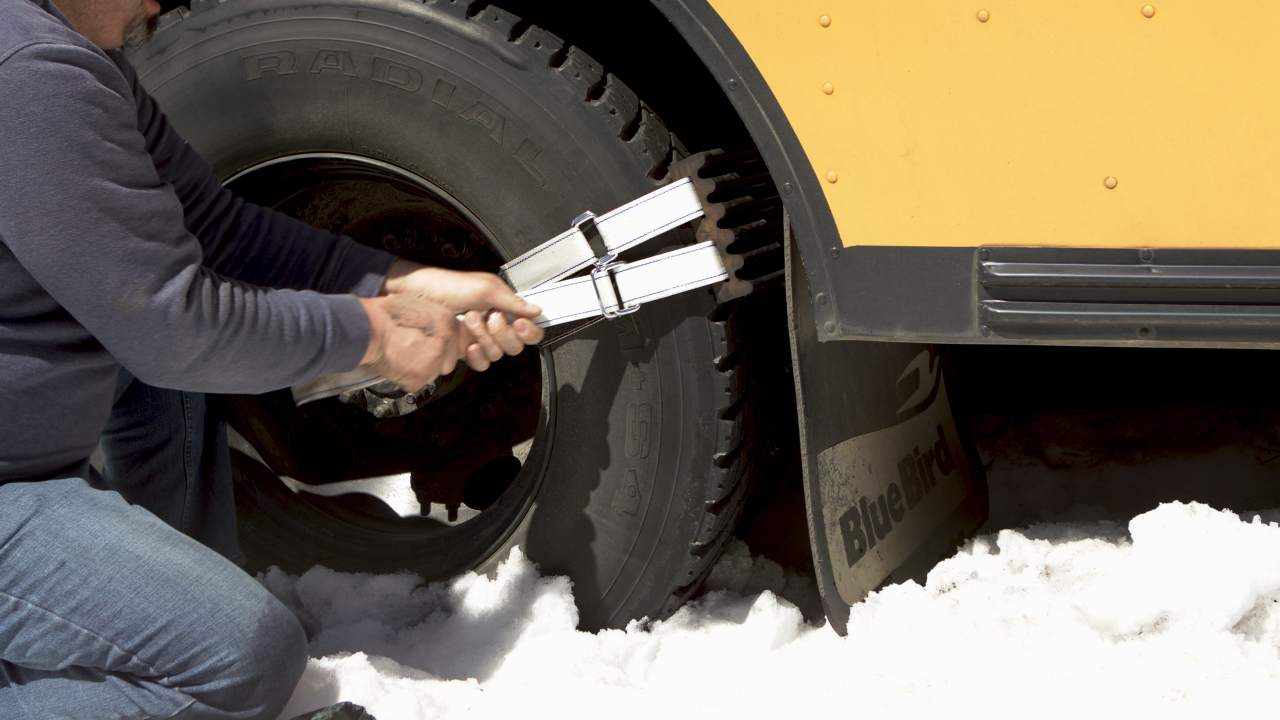 Trac-Grabber, LLC is the designer, developer, and wholesaler of a rescue device called Trac-Grabber. Trac-Grabber is a new revolutionary and inexpensive device which is quickly and easily strapped to the drive wheels of a vehicle which is stuck in the sand, mud, or snow, and enables the vehicle to get unstuck quickly under its own power.

Mobile & Video Production Services – Florida based Trac-Grabber LLC contacted Black Falcon Productions to design and produce two video marketing videos for their website featuring their product being used on a large semi-tractor trailer truck and a full-sized school bus.  This campaign consisted of those two vehicles stuck in snow or ice and the driver utilizing their amazing product to get “unstuck” without additional resources.

Design and produce two different video marketing videos using a commercial truck and school bus stuck in the snow.  In each, the vehicle is shown stuck and spinning its tires in the snow. The driver then produces a set of Trac-Grabber devices, installs them and eventually gets free of the snow without additional assistance.

Both videos were shot using rented commercial vehicles in the Mt. Hood National Forest at an elevation of approximately 6,000 feet where snow was still prevalent in April.   In addition to shooting the different scenes in the snow, our client wanted very specifically word narration incorporated into the video at certain points of the video track.

Shooting on location in the snow with full crew and equipment required a day of location scouting to find an area that would suffice and still be accessible for crew and equipment.  In addition to finding the right location, we had to find and rent a commercial truck and school bus, hire drivers with the appropriate licenses and transport both vehicles to the shooting location 75 miles away.  Shooting in the National Forest also required getting permits and having multiple sets of the Trac-Grabber devices shipped from Florida in a very short time frame.

Once on location, our crew had to negotiate fairly difficult terrain on foot to haul the various pieces of production equipment to the snow-covered roadway without leaving footprints that would be visible in the videos.  Thanks to the talents of our hired drivers, we were able to get the vehicles onto the snowy roadway, get both stuck and then unstuck using the Trac-Grabbers.

Being in the northwest, Black Falcon Productions is accustomed to working in environmentally challenging situations.  It’s one of those locations where the sun is shining one minute and raining in the next.  Besides having a large contingent of protective equipment for our gear, crew members have learned through experience to be ready to work in any environment.  They have also learned that the cost of a reshoot on location is frequently prohibitive, so they have to get it right the first time.

Shooting in snow is difficult anytime due to the high contrast ratio between the snow and the focal subject depicted in the snow.  Using professional monitors and scopes, we were able to dial in the right camera settings and get the shots we needed.  Recording the audio on-screen narrations was also difficult due to our close proximity to a heavily used roadway and on-going vehicle noise.

Once the shoot was complete, our editor was called upon to use his skills to tweak the audio and video segments in post-production to make sure the finished commercials were as visually and audibly clean as possible.

Black Falcon Productions was able to shoot, edit and deliver on time and within budget the two commercials our client asked for in 4K detail.  The videos will be used on their website and various social media sites to engage and educate viewers and garner potential new customers.  At the same time, they will enhance their own website SEO and conversion rate by using video to market their products.